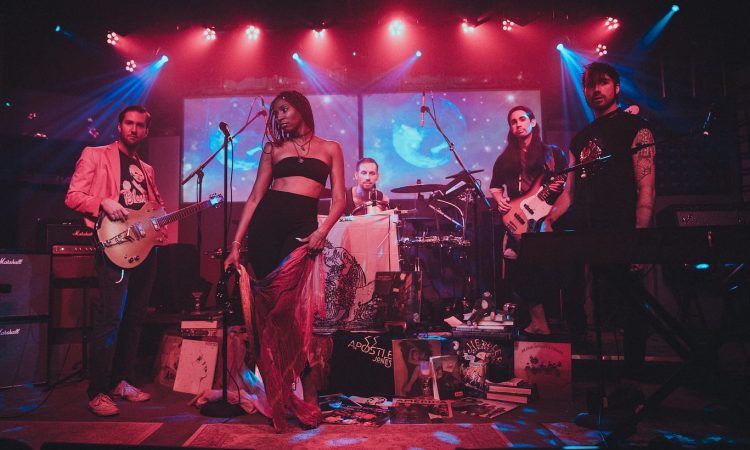 On Tuesday, July 28, 2020, a local Cleveland band will offer a visually stunning and ephemeral world of fresh sounds from Cleveland’s Indie-Soul band, Apostle Jones. Apostle Jones teams up with Taste CLE’s founder Adam Bossin, to launch his newest venture, American Music Tour. The show is produced by Cleveland’s grassroots recording/live-stream studio, The Center for Rock Research. The amped-up virtual show delivers virtual audiences an hour of visually stunning 5-camera, theatrical lit and a live music event not yet seen in 2020. The live stream event will feature new and old music with premier stage effects and lighting. This show is a landmark moment not only for the up-and-coming local band but for locally produced livestreamed performance art and partnerships between different producing agencies. Apostle Jones will follow the live-stream by recording their debut EP at The Center for Rock Research, slated for a Fall 2020 release. Viewing for Smoke and Mirrors will be free and easily accessible
online for all audiences on Apostle Jones’ official Facebook page and through the AmericanMusicTour.com website (for non-facebook users).

SMOKE AND MIRRORS will will feature songs played by a five-piece band to create an interstellar, cosmically lit atmosphere. Streaming into your homes live from The Center for Rock Research, located in downtown Cleveland warehouse district. Apostle Jones and The Center will usher in a renaissance of the concert experience in this new digital age, pairing
technology and music in a premier theatrical fashion.

Apostle Jones, since bursting onto the Cleveland Music scene in 2018, has played over 100 shows and celebrated music festivals including Burning River Fest, BriteWinter, Ingenuity Fest and Twinsburg Blues Festival. Local venues include the Music Box Supper Club, Brother’s Lounge, Grog Shop, Mahalls and Stella’s Music Club. “We – like most artists – lost a lot of work but we have used the time to regroup creatively around making music. We’ve been jonesing for the connection we feel to audiences and refuse
to accept this these days as a lost opportunity. This show is passion turned into purpose, set on reclaiming and elevating the live-music experience for virtual audiences during this Covidera,” says Mikey Silas, lead vocalist for Apostle Jones. Smoke and Mirrors will also feature a
tribute to Silas’ dad who died unexpectedly in June, due to complications from surgery. “My dad loved Cleveland, live music and helping people. He lived his life in service. Our goal with this show is to also inspire music and theater lovers with a chance to forget where they are, what’s troubling them and escape with music that resonates with the soul.”
Smoke and Mirrors features the member of Apostle Jones Mikey Silas, Jessica Kennan, Tyler Lobdell, Berdt Barrios and Todd Marshall, and collection of road-tested songs and a batch of new material. The new material will be recorded for their debut EP, recorded at The Center for
Rock Research right after the live-streaming event.

Apostle Jones’ SMOKE AND MIRRORS on Tuesday, July 28, at 9 PM will be viewable online at:
https://www.facebook.com/apostlejonesmusic
https://americanmusictour.com (for non-facebook users)