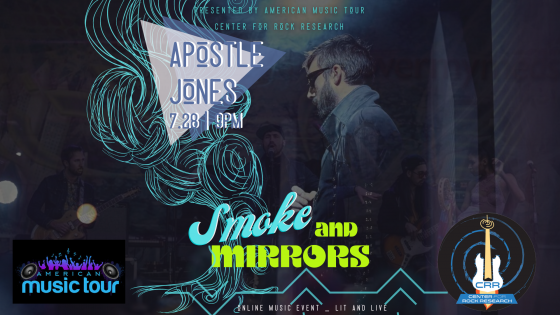 SMOKE AND MIRRORS featuring Apostle Jones and presented by The Center for Rock Research and American Music Tour, will usher in a renaissance of the concert experience in this new digital age, pairing technology and music in a premier theatrical fashion.
On Tuesday, July 28, 2020 at 9PM, we will debut a visually stunning and ephemeral world of fresh sounds.
We – like most artists, companies, studios, promoters – lost a lot of work but we have used the time to regroup creatively around making music. We’ve been jonesing for the connection we feel to audiences and refuse to accept this these days as a lost opportunity. This show is passion turned into purpose, set on reclaiming and elevating the live-music experience for virtual audiences during this Covid- era,
The event will be streamed live on Apostle Jones’ FB page as well as aggregated to various feeds and sites to accommodate non-facebook users.
__________
**ABOUT the collaboration:**
Cleveland’s rust belt, Indie-Soul band, Apostle Jones teams up with Taste CLE’s founder Adam Bossin, to launch his newest concert series venture, American Music Tour. The show is produced by Cleveland’s grassroots recording/live-stream studio, The Center for Rock Research. The amped-up virtual show delivers virtual audiences an hour of a visually stunning 5-camera, theatrically lit and live music event not yet seen in 2020. The live stream event will feature new and original music with premier stage effects and lighting.
__________
**DEBUT EP coming soon!**
Apostle Jones will follow-up the live-stream show, recording their debut EP at The Center for Rock Research at the end of next week, slated for a Fall 2020 release.
Easily accessible viewing of Smoke and Mirrors will be free and accessed online for all audiences on Apostle Jones’ official Facebook page and through the AmericanMusicTour.com website (for non-facebook users).
Photo taken at The Center for Rock Research
_________
**APOSTLE JONES:
Apostle Jones, since bursting onto the Cleveland Music scene in 2018, has played over 100 shows and celebrated music festivals including Burning River Fest, BriteWinter, Ingenuity Fest and Twinsburg Blues Festival. Local venues include the Music Box Supper Club, Brother’s Lounge, Grog Shop, Mahall’s and Stella’s Music Club.
www.mikeysilas.com/apostle-jones
**THE CENTER FOR ROCK RESEARCH:
Our main performance area is a 1200 s.f. facility used for both performance and recording. It features a full stage and audience area, and we open the doors a few times a year for special events and performances. This stage features a full complement of sound and lighting equipment including mains by EV and Turbosound, monitors by RCF, input splitting to Studio a and B via Radial splitters (Jensen equipped), an X32 main console, custom cabling and harnesses by CBI, Splitters and DI’s by radial, and a full line of Microphones and stands. The lighting system is a comprehensive intelligent lighting rig with control by an Avolites Titan Quartz console, moving heads, scanners and LED hex pars by Elation, ADJ and Chauvet. Our crowning jewel is a Laserworld 3.3mw RGB scanning laser with Pangolin control software.
In Addition, the Center has a comprehensive inventory of equipment available for recording and rental including keyboards by Korg and Roland, amplification by Marshall, Orange, Fender, Ampeg, Yamaha, and Vox, and a slew of guitars, drums, percussion and stringed instruments.
www.centerforrockresearch.com
**American Music Tour:
Created by Adam Bossin, founder of TASTE CLE and many events around Cleveland, is launching and will become a subscription based concert series. Featuring live-streamed music and artists from around the USA.
______
Apostle Jones’ SMOKE AND MIRRORS on Tuesday, July 28, at 9 PM will be viewable online at: https://www.facebook.com/apostlejonesmusic
– AND –
https://americanmusictour.com (for non-facebook users